Overview of Patent Law in India

What is a Patent?

A patent is an exclusive privilege given to the author by the State to prohibit anyone from utilizing, creating, and selling an invention for a specified duration of time. It applies to a monopoly right on an invention. However, not all inventions are patentable and nor is it essential that inventions be protected solely by patent. Other forms of intellectual property rights can protect the final product which results from an invention. The primary objective for enacting patent law is to encourage inventors to make a greater contribution to their field by granting them exclusive rights to their inventions. In India, an innovation referring to a new product or procedure that involves the inventive phase and is capable of industrial use can be patented. Nonetheless, this does not, therefore, come under the scope of innovations which are non-patentable as provided for in sections 3 and 4 of the (Indian) Patents Act 1970. A patent application can be filed, either alone or jointly, by true and first inventor or his assignee.

The history of patent law in India begins with the enactment of the Indian Patents and Designs Act in 1911. Subsequently, in 1972, the current Patents Act 1970, came into effect, amending and consolidating the established patent legislation in India. The Patent Act essentially is based on the Justice Ann report ‘s recommendations, an Ayyangar Committee led by Iyengar Rajagopala. One of the recommendations was the granting of process patents in relation to drug, drug, food, and chemical inventions. The Patents Act, 1970 was amended once again by the Patents (Amendment) Act, 2005 concerning the extension of product patents in all areas of technology including food, medicine, chemicals, and microorganisms.

Patents act is the subset of the Intellectual property laws and a branch which deals with new inventions. According to the Patents Act 1970, there are two types of patents i.e. product patents and process patents. The product patent is the end result or the output produces of a product and the process patent is the journey of a patent being produced. Under the Patent Act, both processes and products are entitled to qualify as inventions if they are new, involve an inventive step, and are capable of industrial application.

For e.g. Paracetamol Tablets can be considered as a product patent while the manufacture of the tablets is the process patent. In the patents, there is no transfer of rights and nor is the concept of Moral or Economic rights. The prime example being that the medicines or the vaccines created by the first country for the COVID-19 will have to share it with the other countries as well.

Under section 2(1)(j) of the Act, ‘invention’ is described as a new product or method requiring an inventive phase capable of industrial usage. The word ‘industrial application’ applies to an invention capable of industrial application which implies that the invention is capable of being produced or used in the industry. Some of the preconditions of the invention are that it would be new, i.e. the technology submitted for patenting was not in the public domain or is not part of the state of the art. The term Patent is defined under Section 2(m) of the Act.

Who is a Patentee?

Patentee is an individual who is registered in the patent registry as the grantee or patent proprietor for the time being. The patentee shall have the right to deal with his property in the same manner as the owner of any other movable property dealing with his property.

Section 48 of the Act, talks about the rights granted to a patentee.

Requirements to Qualify as Invention

Under Section 2(l) of the act, the Novelty or the new invention or the new product is any invention or the technology and is not anticipated by the prior publication in or outside India. The novelty shall not fall in public domain or form part of any prior act. Patents can be globally registered. The patent is always given for new inventions. It shouldn’t have been invented in our country or outside of our country so that it becomes a novelty. If a pen is invented, and it has not been anticipated anywhere else, then it’d be considered a novelty. The patent is entitled to the one who files the application first and not to the one who has invented it first. Section 3 is the exception to the patents and needs to be learned thoroughly and everything in the world is patentable except few.

What is Prior art?

Existing knowledge in the field of claimed invention or knowledge is called the Prior Art. To satisfy the criteria of novelty, it should be: –

In India, the duration of each patent is 20 years from the date of filing the patent application, irrespective of whether it is filed with provisional or full specification. However, in the case of requests submitted under the Patent Cooperative Treaty (PCT), the 20-year period begins from the international filing day.

Patent can be qualified only if all three criteria are fulfilled respectively i.e. of Novelty, Inventive Step and being Capable of Industrial application, failure of any of the three will result in the patent as unqualified and thus, the application for the same will be rejected.

What cannot be patented?

Section 3 deals with the exceptions of which subject matters are excluded from the patents.

a) Frivolous Inventions: These are contrary to natural laws. E.g. If any invention runs from the blood of a human and nothing else. This would be contrary to the natural laws and will come under the frivolous inventions. Something always against the establishment of natural laws.
b) Inventions against public order or morality or which causes harm to the environment.
c) Mere discovery of scientific principles or any discovery. E.G Newton’s theories and other principles etc. If these theories will be patentable, how wills students study them if they are not given freely in the public domain.
d) Mere discovery of a known substance is not patentable.

Novartis AG vs. Union of India

In 1998, one of the largest international pharmaceutical companies i.e. Novartis International AG filed an application as per the TRIPS agreement before the Chennai Indian patent office for the grant of a patent for an anticancer drug ‘Glivec’ which is used to treat Chronic Myeloid Leukemia (CML) and Gastrointestinal Stromal Tumours (GIST) invented from Beta crystalline form of “Imatinib mesylate”. This drug is famously used in the treatment of cancer and the same is patented in more than 35 countries.

The issues raised in this case are as follows: –

The patent can be filed by the two ways namely; provisional specification and complete specification. The patent will be published right after 18 months from the date of filing. If the person wants to get the patent published before 18 months, he will have to pay the statutory fee for the publication. A requisite form can be filled or a fee can be paid for the same. The rule of jurisdiction has to be followed and the application will be filed accordingly, as per the jurisdiction. The second step for publication is that the request for examination shall be in 48 months. The third step is the examination and it’s not automatic unlike the publication and the applicant will have to fill the requisite form for the publication. Anyone can file it on behalf of the applicant. Timeline is 48 months for filing of the application from the priority date. The patent examiner will be according to the patent orientation. The patent examiner will check the patent database and other credentials on the three important criteria for the patent. The examiner will check the applicability under sections 3 and 4 respectively. The examiner will check the clerical mistakes as well. The drawing sheets and formatting guidelines are to be followed as well. The first examination report will be created after the patent is being ensured as authentic by the examiner. A reply shall be given within the 6 months of the first examination report by the applicant. After the reply given for the examination, if the examiner needs further clarification for the invention, he shall have the applicant present physically or via video conference. 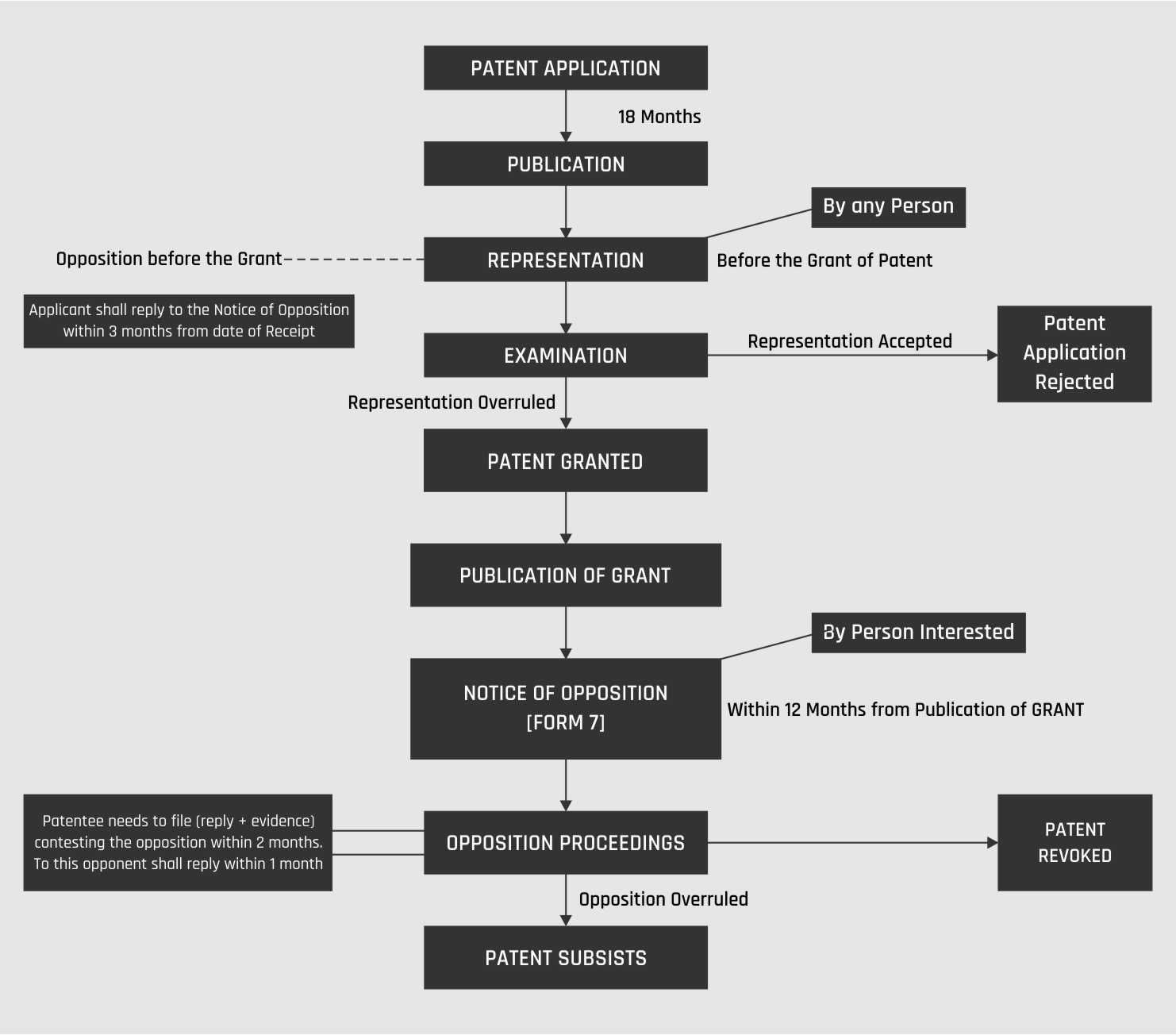 The sections associated with the patent application are: –

Section 9 and 10 deals with the provisional and complete specifications respectively.

Section 43 talks about the grant of patent.

Compulsory Licensing is one of the most important aspects of the Indian Patents Act 1970, subject to certain conditions being fulfilled. At any period after the expiry of three years from the date of the sealing of a patent, any interested party may, subject to the following conditions, apply to the Patent Controller for the issuance of a compulsory patent license. If a person grants permission to use any product, then it would be called a voluntary license. The first stage is taking a voluntary license. There are three grounds on which you can ask for the compulsory license. The license can be asked for any time after 3 years of the grant of the patent. Any person can ask for a compulsory license. Be it a natural person, artificial person, or a company.

Grounds for granting of compulsory license

Patent infringement is a crime concerning the unlawful use, produce, sell, or offer or sell of the subject matter or proprietary invention by another. There are several various patent forms of utility patents, design patents, and plant patents. The fundamental principle underlying patent infringement is that unauthorized persons are not able to use inventions without the consent of the proprietor. Patent infringement occurs directly or indirectly.

Indirect patent infringement: It is divided into two types: –

This case is on micro-organisms. Genetically engineered bacteria. Process patent was demanded over. A patent was claimed over the process, product, and components.

First issue: -Bacteria is a living thing, then can it be patentable. SC said that human-made organisms are patentable and the second thing stated was that subject matter to include anything made by man is patentable. Only micro-organisms in living beings are patentable.

Dhanpat Seth vs. Union of India

Dhanpath produced Kilta alike device using bamboo, which can be used for manual agriculture and it was light in weight and they started to produce and manufacturing and Neel Kamal plastic started using that without paying the royalty to Dhanpath and it forms the traditional knowledge. Dhanpath said that the original Kilta was painful and heavy to use and for this reason only, they started using the basket. Whether valid patent lies with Dhanpath Seth?

The second issue in the case was Injunction and the third was Infringement.

Court held that bamboo baskets don’t complete the novelty step and the traditional knowledge clause. It was a mere duplication of Kilta and the usefulness was not shown and there is no inventive step and it reiterates the property.

(This article has been written and submitted by Mr. Prakhar Agnihotri during his course of internship at B&B Associates LLP. Mr. Agnihotri is a fourth year law-student at University of Petroleum & Energy Studies, Dehradun, Uttrakhand.)

Mr. Ambransh Bhandari is a well-versed Advocate in Chandigarh High Court and is the Managing Partner of the law firm B&B Associates LLP. Mr. Bhandari is renowned for his cogent arguments and his valuable insights on various aspects of law; he is sought by a reputed national and international clientele for decoding complex lawsuits and legal matters.

Patents – What is a Patent?

Procedure To Apply For a Patent

What is Patent Pending?

Patent-All you need to know