Amid various rumors of extension of Coronavirus lockdown beyond 10 days, the Centre has today confirmed that there were no such plans to extend the 21-days lockdown, which came into force on the midnight of 24 March.

As per sources, while citing the rumors and media reports as baseless, the Cabinet Secretary of India, Rajiv Gauba stated that “I am surprised to see such reports. There is no such plan of extending the lockdown.”

Meanwhile, the Press Information Bureau of the Ministry of Information and Broadcasting affirmed the statement made by the Cabinet Secretary, via Twitter. 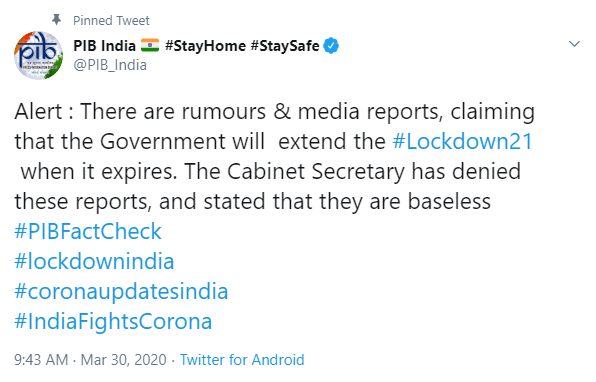 On 24 March, while citing that social distancing is the only way out for the country in its decisive battle against the coronavirus, Prime Minister Narendra Modi has announced a nationwide lockdown for 21-days to combat the spread of pandemic disease. All educational institutions, offices of State, Union Territory Governments, their Autonomous Bodies, Corporations, Commercial, Private and Industrial Establishments, as well as transport services, were completely shut down, in wake of the 21-day lockdown. In major cities, all construction sites have been shut for indefinite periods, which left the migrant workers with no work insisting them to leave for their native villages.

Subsequently, on 30 March, Prime Minister Narendra Modi, in his ‘Mann Ki Baat’ radio broadcast, sought for nation’s forgiveness for the hardships caused by the stringent nationwide lockdown, saying it was necessary because the country was fighting a battle between life and death caused by the outrageous spread of COVID-19.

Meanwhile, India has reported 1,071 cases of coronavirus with a total death of 29, so far.