In a major twist to the case of alleged assault by a Zomato delivery executive in Bengaluru, an FIR has been registered against the social media influencer Hitesha Chandranee, who played a victim card in the alleged incident.

The FIR is based on the complaint filed by the delivery executive Kamaraj, who has, in turn, accused the woman Hitesha of abusing him and repeatedly hitting him with her sandal.

According to the FIR, Hitesha has been booked under Sections 341(wrongful restraint), 355(Assault or criminal force), 504 (intentional insult), and 506 (criminal intimidation) of the Indian Penal Code.

In his complaint letter to the police, Kamaraj has alleged that on March 9, at around 4:50 pm, Histesha, angered by her food order being delayed, got into a fight and abused him. He further stated that she stopped him from leaving her premises all the while hitting him with her sandals.

According to a police officer, Kamaraj had stated that Hitesha had hit him with slippers, accused him of defaming her, and hurling abuses at him.

On March 10, Hitesha Chandranee, a resident of Electronic City, made an Instagram video accusing Kamaraj of assaulting her, which caused an injury on the nose. Hitesha’s video went viral prompting the food delivery app to initiate an action.

In a four-minute-long video, Hitesha explained the entire episode from her perspective and said, “I didn’t open the full door, I spoke to him from a gap in the door and told him the I am talking to the customer care. But he refused to take the order and started screaming, ‘bloody I am your slave or what’. I got scared and I tried to shut the door. But he was so huge, he pushed back the door, snatched the order back from my table, and punched me. Then he ran away.”

The complaint copy of Hitesha mentions that when she told Kamaraj that due to the food being delivered 59 minutes late, she will not pay the bill. She alleged that in response, he abused her and punched her nose with his fist.

“We spoke to Hitesha as soon we got (news of) the escalation, met her, and offered our complete support. We’re in constant touch with her. As per our protocol, we’ve suspended the delivery partner from our platform pending investigation. Our team has been with him throughout and we’ll ensure due process is followed,” a statement by Zomato said.

On the other hand, Kamaraj in an exclusive interview with the sources gave his version of the events in which he alleged that Hitesha misbehaved with him when he went to deliver food at her residence. According to Kamaraj, Hitesha refused to pay money for the food claiming that the delivery was late.

“After I reached her apartment door, I handed her the food and I was expecting her to pay me. I also apologized since the delivery was delayed due to traffic and bad roads. But she was very rude from the outset. She took the food but refused to pay for the order. She said she was talking with Zomato chat support”.

Fearing that he will lose money, he pleaded that she pay for the order. “At this point, she called me a ‘slave’ and then she started shouting ‘What can you do?’ In the meantime, Zomato support told me that they have canceled the order from their end based on her request and I asked her to return the food but she did not cooperate,” he added.

Further, Kamaraj said that Hitesha started using expletives in Hindi and started hitting him. “For my safety, when she was hitting me, I tried to use my hand to shield her blows. When she was trying to push my hand away, she accidentally hit herself with her finger ring on the nose, which led to the bleeding. Anybody who sees her face will understand that this wouldn’t be created by a punch. And I don’t wear any rings,” he said.

“I don’t want to make it more complicated, let the truth win. If not, I will fight it legally. I have a mother with co-morbid conditions, my father died 15 years back, I am the only breadwinner for my family. I am working in Zomato for the past 26 months with 4.7 ratings. As of now, the company has blocked my ID until this case completes and assured of taking it back once the matter resolves,” Kamaraj had reportedly told the sources.

Following the interview, Kamaraj received wide support from netizens, who sought a thorough inquiry and action against Hitesha if she had made a false complaint.

Soon after Kamaraj’s interview went viral, Hitesha, deleted her video from Twitter that went viral, based on which Kamaraj was arrested. Social media had been heavily divided, while few supported Hitesha’s version, on the other hand, many extended supports to the delivery executive after his exclusive interview.

Zomato, which had initially assured Chandranee that it would help her with the police investigation along with assistance on the medical care required, later clarified it was also with Kamaraj extending all possible support.

Zomato’s founder Deepinder Goyal released a statement saying that the company is currently providing all resources to Kamaraj in order to ensure that ‘both sides of the story come to light in the ‘spirit of fairness’.

Goyal also released an official statement on the matter. “Kamraj has made 5,000 deliveries for us so far, and has a 4.75/5-star rating on our platform (which is one of the highest) and has been working with us for 26 months now (these are facts, not opinions or inferences),” the statement read.

Twitter users, including many celebrities, have supported the Zomato delivery agent Kamaraj after Hitesha tried to defame him with her fake allegations over the incident. 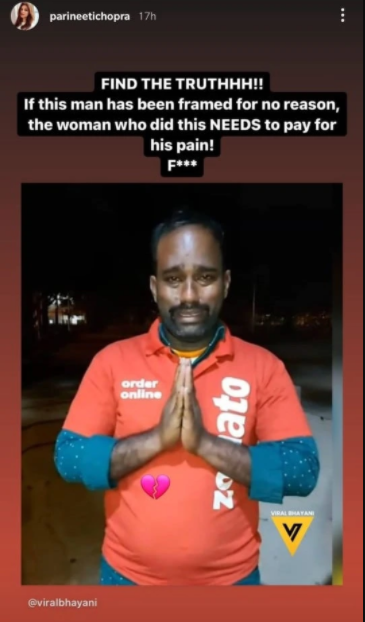 Netizens have found a discrepancy in Hitesha’s statement. Many on social media have pointed that the model-turned-makeup artist did not have any injury on her hand when she had initially posted the video on Instagram, however, in a recent interview she showed scratch marks on her hand.

“While her first video of the fake allegation the scratch mark was not there but while giving an interview to media afterward, she shows a scratch mark. Aisa kaise chalega didi. Homework acche se nahi kiya didi ne,” a Twitter user wrote.

Mother of Five Allegedly Gang Raped by 17 Men in Jharkhand