American daily newspaper The New York Times is being criticised over a job ad that it has posted on its website and Linkedin. It is alleged that it has posted an entry-level job requirement wherein it has mentioned that the candidate should be able to write against the democratically elected govt.

The job ad allegedly appealed to the candidates who can write against the democratically elected Indian government. The opening was for South Asia Business Correspondent in New Delhi.

“India’s future now stands at a crossroads. Mr. Modi is advocating a self-sufficient, muscular nationalism centered on the country’s Hindu majority. That vision puts him at odds with the interfaith, multicultural goals of modern India’s founders. The government’s growing efforts to police online speech and media discourse have raised difficult questions about balancing issues of security and privacy with free speech. Technology is both a help and a hindrance,” the job description said.

The job description went on to add that the government’s growing efforts to police online speech and media discourse have raised difficult questions about balancing issues of security and privacy with free speech. “Under Narendra Modi, its charismatic prime minister, India has moved to rival China’s economic and political heft in Asia, a drama playing out along their tense border and within national capitals across the region.,” added further.

The @nytimes has dropped all pretences of impartiality with this job ad for a South Asia Correspondent. They are clearly looking to hire an anti-Modi activist who can also stoke anti-India sentiments in our neighbourhood. With this, the paper qualifies as a foreign-funded NGO. pic.twitter.com/hw3QIRqjzn

Were Those The Exact Requirements That New York Times Mentioned To Hire A Candidate?

The position includes coverage of neighboring countries like Pakistan, Bangladesh, Nepal, Sri Lanka, Bhutan and the Maldives, each with its own rich history and complicated relations with its enormous neighbor.

We are looking for a self-starting correspondent who can explain these forces to a global audience. The position requires a strong writer with the ability to juggle breaking news, smart analysis and ambitious enterprise. We want someone eager to react quickly to news as necessary, but who is also able to write thoughtfully and deeply about important issues and events, with an empathetic ear for the people of India and the region. 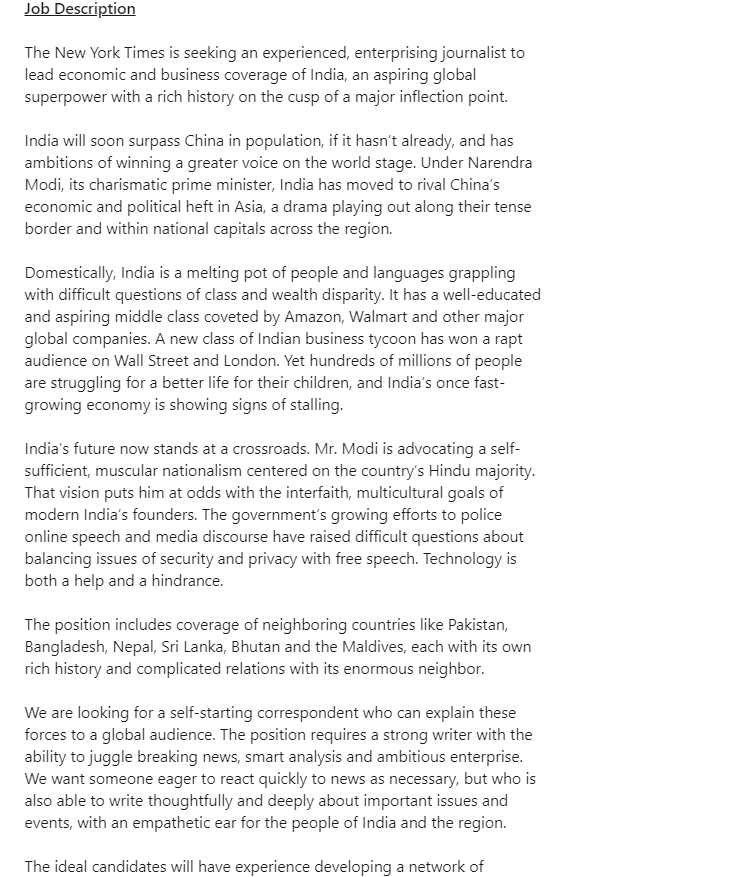