“We are a democratic country. You have to follow the rule of law,” said NV Ramana, Chief Justice of India.

Amid ongoing efforts to fill the tribunal vacancies, the Supreme Court on Wednesday expressed its disappointment over the unfilled vacancies in the quasi-judicial bodies across the nation. The three judge bench rapped the Centre government for cherry picking from the recommendations made by SCSC.

“I have seen the NCLT (National Company Law Tribunal) appointments…. more recommendations were made. But in (the) appointments, cherry picking was done. What kind of selection is this? And the same thing (has been) done with ITAT (Income Tax Appellate Tribunal) members also. We are very unhappy with how the decisions are being taken,” CJI Ramana said.

He further added, “I am also part of the NCLT Selection Committee. We interviewed 544 people… out of which we gave the names of 11 judicial members and 10 technical members. From all of these recommendations, only some of them were appointed by the government… rest of the names went to the wait list.”

“What is the sanctity of the selection committee (whose composition includes Supreme Court Judges) if the government is going to have the last say? The selections that we conducted will become useless,” stated Justice L Nageswara Rao.

CJI Ramana led apex court bench also stated that it is holding hands on initiating contempt proceedings against the government and also asked to cite the reasons behind rejecting recommendations.

On September 6 also, the Supreme Court criticised government inaction for the appointment in tribunals and gave it a one week ultimatum to file the reply. The court also censured the government over re-enacting the very same provisions of the Tribunal Reforms Act.

Submitting its affidavit on Tuesday night, Centre informed the apex court that it has appointed 84 members to various tribunals since 2020 and There are no recommendations pending before it anymore.

38 names cleared. Among which,

In the affidavit, the Centre also emphasised,

“the SCSCs will have to now follow the new law on administration of tribunals and the candidates would have to be shortlisted as per the rules to be framed under the Tribunal Reforms Act, 2021. The rules have been prepared by the government and will be notified shortly after which the process of making fresh appointments to the tribunals could go on.”

There were 240 vacancies in the 15 tribunals. 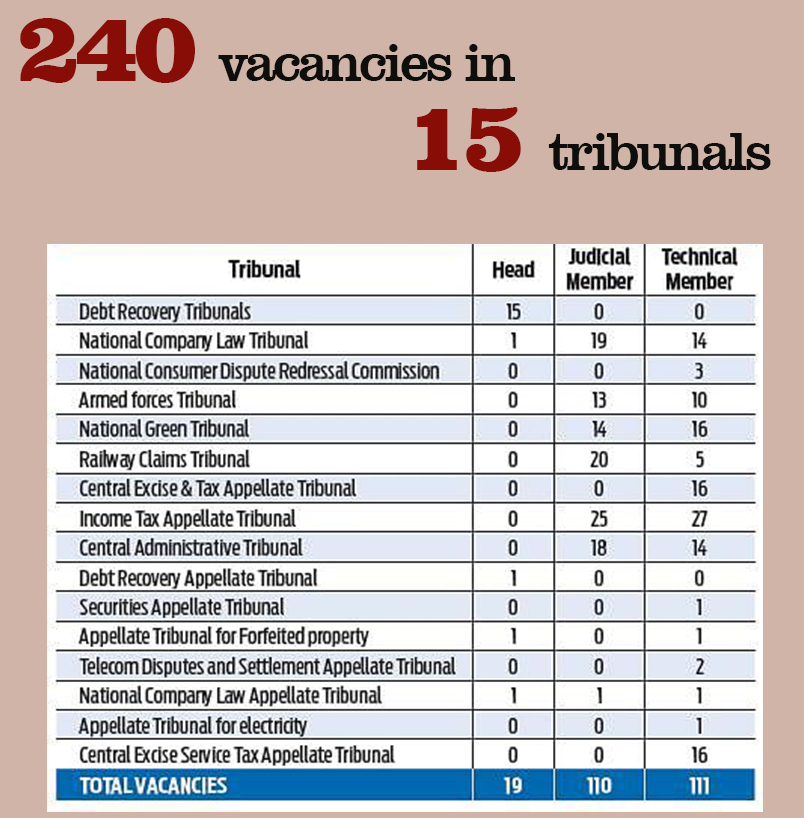 “Give Up Bollywood Movies and Parlour, Dedicate Your Time To Law”: Justice Pratibha M Singh To Women Lawyers