Amid the growing geo-political tensions with China and the growing border tensions, the Government of India in a major decision has decided to ban around 59 Chinese apps including TikTok, Shareit, WeChat, UC Browser among many others. As per the Ministry of Information Technology’s notification, this move of the Central government is to safeguard the interests of crores of Indian mobile & internet users and targeted to ensure the safety and sovereignty of the Indian cyberspace. 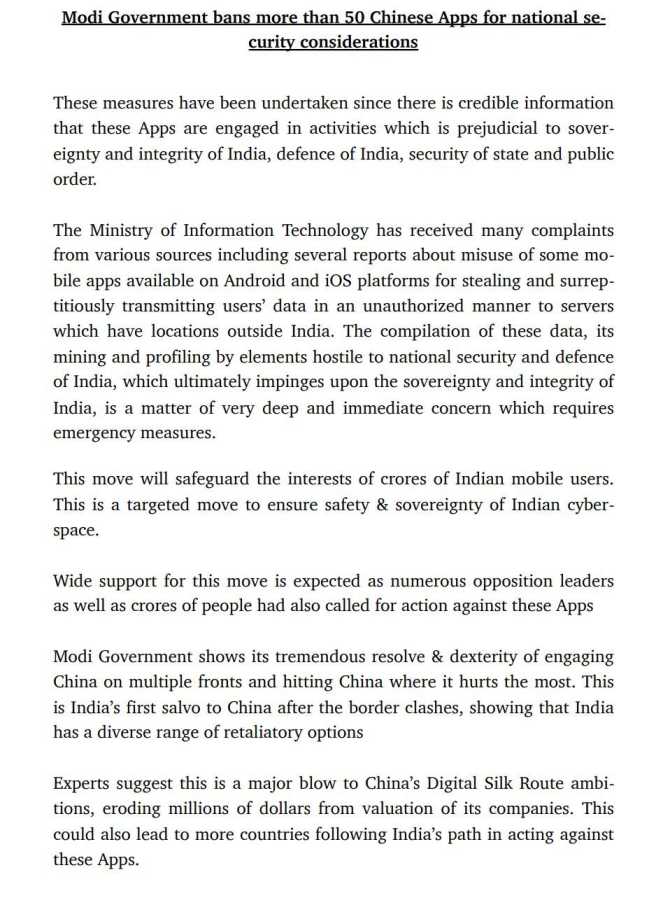 The Ministry further stated that it has received many complaints from various sources including several reports about the misuse of some mobile apps available on Android as well as iOS platforms for stealing and surreptitiously transmitting user’s data in an unauthorized manner to the servers which have locations outside India.

“The Computer Emergency Response Team (CERT-IN) has also received many representations from citizens regarding the security of data and breach of privacy impacting upon public order issues,” mentioned the press release.

“The compilation of these data, its mining, and profiling by elements hostile to national security and defense of India, which ultimately impinges upon the sovereignty and integrity of India, is a matter of very deep and immediate concern which requires emergency measures,” added the Ministry in the notification.

The move came in the backdrop of a current stand-off along the Line of Actual Control in Ladakh with Chinese troops. Meanwhile, there have been ongoing criticism and backlash from Indian authorities against Chinese applications. This move by the Indian government marks the largest sweep against the Chinese technology companies.

Furthermore, the statement by the Ministry also stated that “There have been similar bipartisan concerns, flagged by various public representatives, both outside and inside the Parliament of India. There has been a strong chorus in the public space to take strict action against Apps that harm India’s sovereignty as well as the privacy of our citizens.”

“Convert, Leave, Or Get Ready To Die”: Taliban Allegedly Asked Afghan Sikhs To Make A Choice