On 27 February, India refuted the claim made by the Organisation of Islamic Cooperation (OIC) on the three-day-long Delhi riots, calling it “factually incorrect, selective and misleading” and advised individuals, organizations and the media abroad, to avoid making ‘irresponsible statements.’

The Organisation of Islamic Cooperation which describes itself as the 2nd largest inter-governmental organization after the United Nations with 57 member states, mostly Muslim majority countries, tweeted on 27 February stating “OIC condemns the recent & alarming violence against Muslims in India, resulting in the death & injury of innocent people & the arson and vandalism of mosques and Muslim-owned properties.” 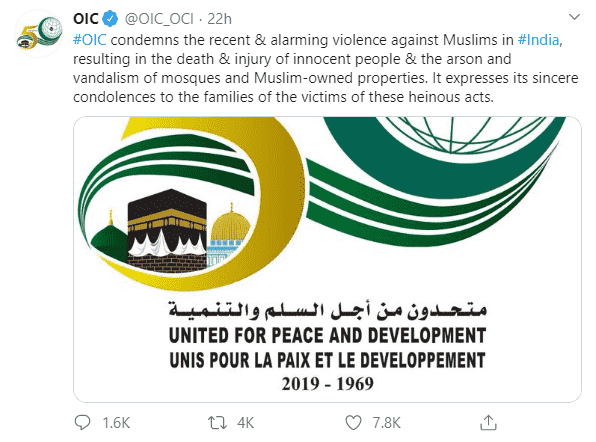 In another such tweet, OIC claimed “The OIC calls on Indian authorities to bring the instigators and perpetrators of these acts of anti-Muslim violence to justice and to ensure the safety and security of all its Muslim citizens and the protection of Islamic holy places across the country.”

Subsequently, while speaking during the weekly media briefing, the Ministry of External Affairs spokesperson Raveesh Kumar, responded to the above statements of OIC which alleged the violence in Delhi was targeted against Muslims lives, mosques and Muslim-owned properties. He stated that “OIC statement is factually inaccurate, selective & misleading. There is an effort on the ground to restore normalcy and create confidence. We urge these bodies not to issue irresponsible statements.”

The MEA spokesperson further said, while the nature of the violence is communal in nature, both Hindus and Muslims have been affected by and that the cause of the violence was being investigated.

“PM himself has publicly appealed for peace and brotherhood. We would urge that it is not the right time to make such irresponsible comments, it can create more problems than it would solve,” he added.

Meanwhile, United States Senator, Bernie Sanders, criticized President Trump for not raising the issue of Citizenship Amendment Act during his visit, in his recent tweet. 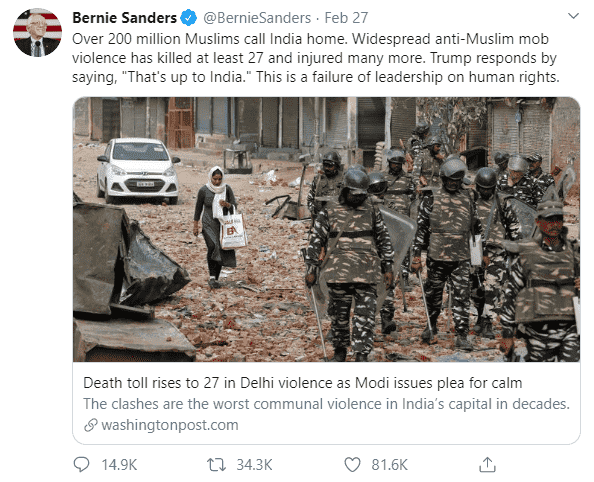 On the other hand, the United States Commission on International Religious Freedom (USCIRF) Commissioner, Anurima Bhargava gave a statement stating, “The Indian government must take swift action to ensure the safety of all of its citizens. These incidents are even more concerning in the context of efforts within India to target and potentially disenfranchise Muslims across the country, in clear violation of international human rights standards.”

Subsequently, Raveesh Kumar responded to all the above queries adding, “What led to this, why this happened will, of course, be a matter of investigation. What is important to note here is that law enforcement agencies are working on the ground. They are working to bring the situation back to normal.”

New Delhi has been battling the ramifications of Citizenship Amendment Act that has led to violence in the streets of Delhi with at least 34 people have been killed in the riots that started on Sunday with clashes between groups supporting and opposing the CAA. As per reports, around 200 people have been injured.

Even If Parents Have Renounced Indian Citizenship, Child In Mother’s Womb Has The Right To Claim Citizenship: Madras High Court