Akshay Kumar Singh, one of the convicts in the Nirbhaya gang-rape case, filed a review plea in SC, seeking review of its 2017 judgment which granted them the death penalty. Akshay, through his Advocate A P Singh made a ludicrous plea in the petition stating, “Delhi’s Air Killing Us Anyway, Why Give Death Penalty?”

The petition additionally argues, “the life span of humans is already getting shorter, as is evidenced by the ancient mythological texts, the death penalty is not required. In Ved, Purana, and Upanishads it is mentioned that in Satyug, people lived for thousands of years. In Treta Yug, men lived for 100 years. But in this era, Kalyug the age of humans is reduced to 50-60 years.”

Akshay was granted the death penalty by the Supreme Court in 2017 along with Mukesh Singh, Pawan Gupta, and Vinay Sharma. The review plea of the other three convicts was already rejected. Akshay filed his review plea on Tuesday citing various ridiculous reasons to reconsider his conviction. 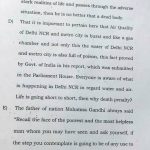 The four convicts, along with 2 others were charged with rape and murder of a 23-year-old woman (Nirbhaya) in 2012. Among the other two convicts, one was tried in juvenile court while the other committed suicide in Tihar jail.

In December 2012, the Nirbhaya was brutally gang-raped and severely assaulted inside a moving bus by six persons and was thrown out on the road in South Delhi. On 29 December 2012, she succumbed to injuries at Mount Elizabeth Hospital, Singapore.

In the 2017 verdict, the Supreme Court upheld the capital punishment awarded to them by the Delhi High Court and the trial court in the case.