Home » News » Pay Re 1 or Go to Jail for 3 Months; Supreme Court’s Verdict on Prashant Bhushan for Contempt of Court

Pay Re 1 or Go to Jail for 3 Months; Supreme Court’s Verdict on Prashant Bhushan for Contempt of Court

The Supreme Court on Monday imposed a token fine of Re 1 on the activist-lawyer Prashant Bhushan, who was held guilty for criminal contempt of court for his tweets against the top court and criticizing Chief Justice of India SA Bobde.

The three-judge bench comprising of Justices Arun Mishra, B R Gavai and Krishna Murari directed the lawyer to deposit the amount by September 15, failing which he will attract a jail term of three months and debarment from law practice for three years. “Freedom of speech cannot be curtailed,” stated the bench while announcing the sentence.

Earlier on 14th August, the court had held Bhushan guilty of criminal contempt of court and stated that the allegations leveled in the tweets against the court and CJI are malicious in nature and have the tendency to scandalize the court.

Bhushan’s tweets were based on distorted facts and have the effect of destabilizing the foundation of the judiciary, the court added. The statement was to influence independent Judicial function, said the top court while adding that, though freedom of expression was important, rights of others should also be respected.

The bench on August 20 had asked Bhushan to reconsider his ‘defiant statement’ and tender ‘unconditional apology’ for the contemptuous tweets till August 24.

Nonetheless, on 25th August, senior advocate Rajeev Dhavan, representing Bhushan, had requested the top court to show ‘judicial statesmanship’ and not make Bhushan a ‘martyr’ by punishing him for contempt over his tweets.

Subsequently, the Apex Court which had asked for an unconditional apology from the lawyer and gave him time to “think over”, noted that “We gave several opportunities and encouragement to (Prashant Bhushan) to express regret. He not only gave wide publicity to the second statement but also gave various interviews to press.”

Reserving its judgment on 25th August, the bench expressed its anguish at Bhushan’s criticism of “sitting and retired” judges.

Meanwhile, Bhushan maintained that he will not apologize and gave a statement on 24th August stating that the views expressed by him through his tweets represented his bona fide (good faith) beliefs and, therefore, an apology for expressing such beliefs would be insincere.

Bhushan’s counsel Rajeev Dhavan had argued that the top court’s order of giving him time for an unconditional apology, was ‘an exercise in coercion’. Bhushan should be forgiven with a message he said, arguing that “One cannot be silenced forever. A message that he should be little restrained in future should be enough”.

The Supreme Court’s decision to hold Bhushan in contempt has been widely criticized by retired judges of the Supreme Court and high courts, lawyers, politicians, members of the civil society, and others. It is being seen as an attempt to quash reasonable dissent. Also, 1500+ lawyers including many senior members of the bar have expressed their dismay and urged the apex court to take corrective steps to prevent the miscarriage of justice.

On the other hand, Prashant Bhushan while citing that he will take a ‘collective decision’ on whether to pay the fine or confront the other options stated that “An apology cannot be a mere incantation and any apology has to be sincerely made. If I retract a statement before this court that I otherwise believe to be true or offer an insincere apology, that in my eyes would amount to the contempt of my conscience and of the institution (Supreme Court) that I hold in the highest esteem.”

With today’s verdict, it is a moral victory for Bhushan and a self-goal by the Supreme Court bench. Although, the activist Lawyer had said that he would accept whatever punishment the court wanted to give him, the public outcry over the sheer injustice of it all has forced the apex court to come up with the fine of Re 1.

First, the apex court held Bhushan guilty for contempt of court for his tweets. Then it levied a token fine of Re 1, failing which he shall be imprisoned for 3 months and be debarred from practicing for 3 years. This is a stark and lucrative goal by the apex court wherein if Bhushan fails to pay the fine, he accepts that he is guilty. If he doesn’t, then he is forbidden from practicing for three years other than the three months imprisonment.

While the verdict brought cheer among the supporters of Bhushan who had been criticizing the court’s contempt proceedings as an assault on free speech, some cautioned that Bhushan may have owed this ‘moral victory’ to his privilege and those others in his place with lesser privilege and influence might not have fared the same.

Also, while some were taken aback by the SC order, others hoped that Bhushan should just pay the fine and get it over with. While many understood the symbolic value of the fine, risking three years of debarment from practice or three months in prison was seen as far more debilitating than paying the fine itself.

On the other hand, Mr. Bhushan took to twitter stating that his lawyer and senior colleague Rajiv Dhavan had contributed 1 Re immediately after the contempt judgment today, which he had gratefully accepted. 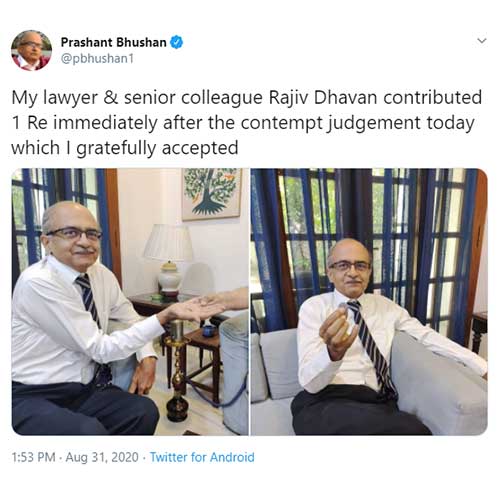 Meanwhile, netzines took to social media and ridiculed the verdict with jokes. 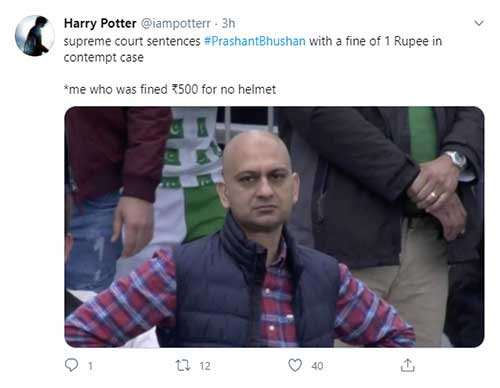 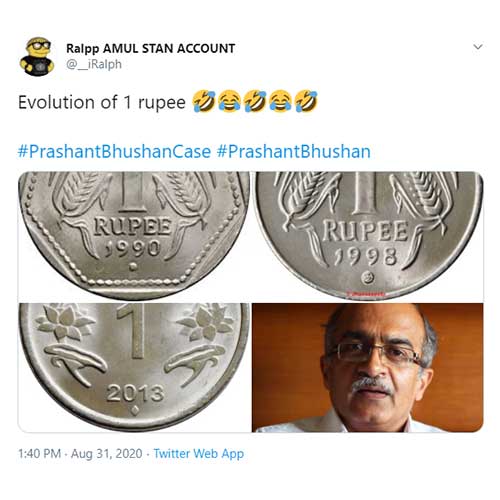 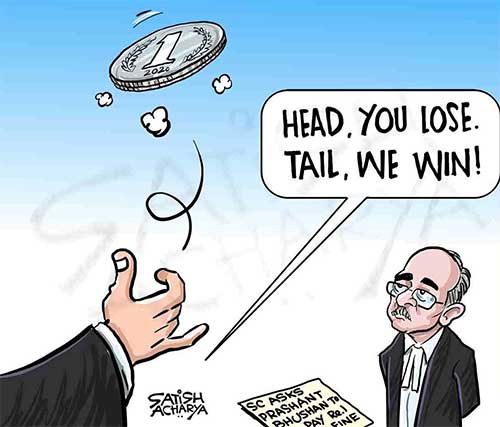 Indefinite Suspension of Internet Not Permissible – SC in Kashmir Lockdown

“Exercise of Power by Centre under DDA Act is Just and Valid”; SC Gives Nod to Central Vista Redevelopment Project with 2:1 Majority