The liquor baron, Vijay Mallya who has been the subject to an extradition effort, took to Twitter in the early hours on Tuesday, seeking for Indian government’s help in sending his company employees home, while citing that all his companies had ceased operations and manufacturing, referring to COVID-19 crisis.

“The Indian government has done what was unthinkable in locking down the entire Country. We respect that. All my Companies have effectively ceased operations. All manufacturing is closed as well. Yet we are not sending employees home and paying the idle cost. Government has to help,” stated Mallya in a series of tweets. He claimed that he has been paying salaries to his employees even though his companies have ceased all operations. 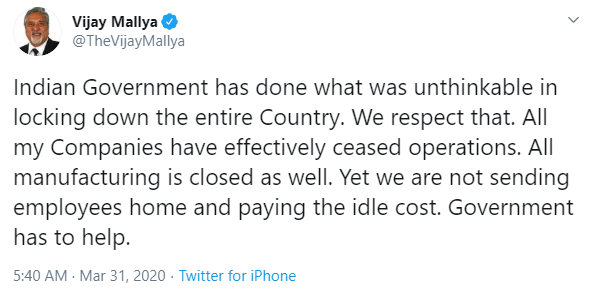 The liquor baron, who has been accused of alleged fraud and money laundering charges has further asked the Finance Minister Nirmala Sitharaman to consider his repeated ‘offer to repay 100 percent’ of the amount borrowed by now-defunct Kingfisher Airlines, in this time of coronavirus pandemic.

“I have made repeated offers to pay 100 percent of the amount borrowed by KFA to the Banks. Neither are Banks willing to take the money and neither is the ED willing to release their attachments which they did at the behest of the Banks. I wish the FM would listen in this time of crisis,” stated Mallya on Twitter. 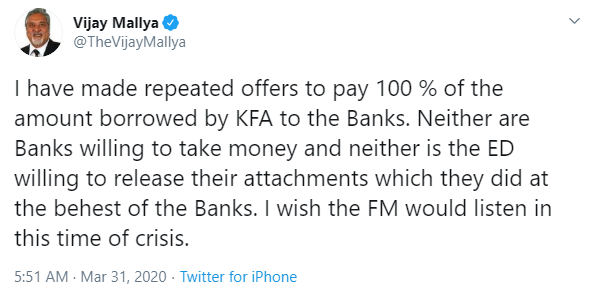 “It is important to stay safe and maintain social distancing at a time the world is battling the Covid-19 pandemic,” he added. 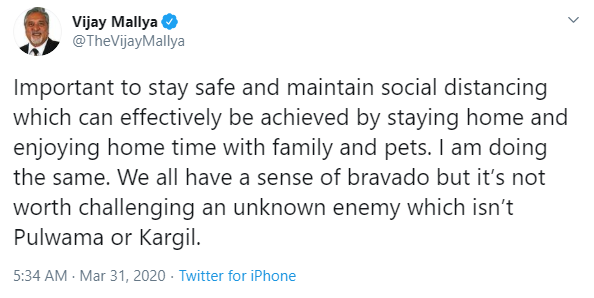 The Supreme Court had in the last month adjourned a plea filed by Mallya, requesting a stay on proceedings initiated by the Enforcement Directorate (ED) to declare him as a fugitive economic offender and confiscate his assets amounting to Rs 9,000 crore.

Vijay Mallya was chairman of United Breweries (UB) Group which has diverse interests in brewing, distilling, real estate, biotechnology, and information technology. In March 2016, Mallya was accused of money laundering by the Enforcement Directorate. He then fled India and has been living in the United Kingdom, since then. Reportedly, he owes more than Rs 9,000 crore to 17 Indian banks. In February 2017, India submitted an extradition request to the United Kingdom after he made his self-imposed exile clear.

Subsequently, on 1 January a Mumbai court allowed the banks to utilize the movable assets of Vijay Mallya to recover the amount he owes them.